Start a Wiki
Welcome to the Firestone Idle RPG Wiki!

Firestone Idle RPG is a multiplayer idle adventure game published by Holyday Studios. In this game, your party of up to 5 heroes and a guardian is fighting hordes of increasingly harder enemies. The earned gold and firestones allow you to research upgrades which will make your team stronger and stronger. In guilds, you can collaborate with other players.

Play the game on:

The game features an in-game chat where you can communicate with other players currently playing. In addition, you can ask questions about the game and get help in the following places: 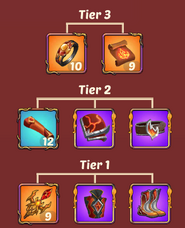 Guild
Add a photo to this gallery

Retrieved from "https://firestone-idle-rpg.fandom.com/wiki/Firestone_Idle_RPG_Wiki?oldid=2849"
Community content is available under CC-BY-SA unless otherwise noted.